I painted this wonderfull Vignette up for a fellow LAF member as a gift! Tomorrow it will be in the post...travelling back to the USA. 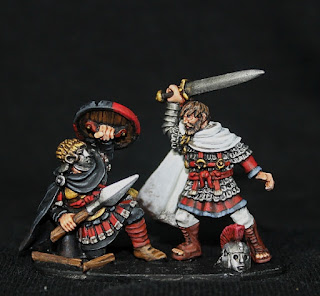 The Descent of the Teutonic Order

I want to introduce my second Project for 2016:

I am building up a 1410 Teutonic Order force for Lion Rampant. I always wanted to paint up some high or late medieval stuff, but could not decide which period exactly to do. I thought about HYW and WotR, discarded those ideas in favour for a "german" theme. And then it struck me: Why not the Teutonic Order? The iconic heraldry, the allied german Knights, all the City militias and also the polish heraldry are so cool. When I shared my thoughts with my mates Westfalia Chris promptly joined me, going for the polish-lithunian Commonwealth.
Here are the first miniatures for my army: 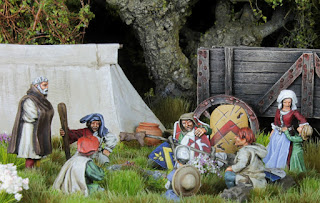 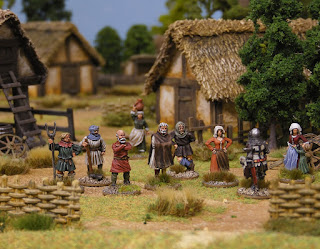 First some civilians. I like Story driven games, and NPCs always add more flavour, apart from looking good on the table. Miniatures are a mix of Perry´s HYW range civilians and 1 Corps medieval camp followers. 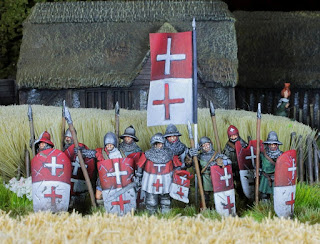 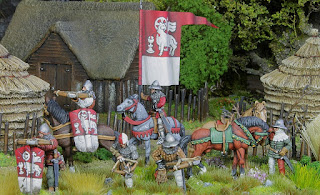 Mounted and Dismounted Crossbowman from Slochow, a mix of Perry HYW and 1Corps. 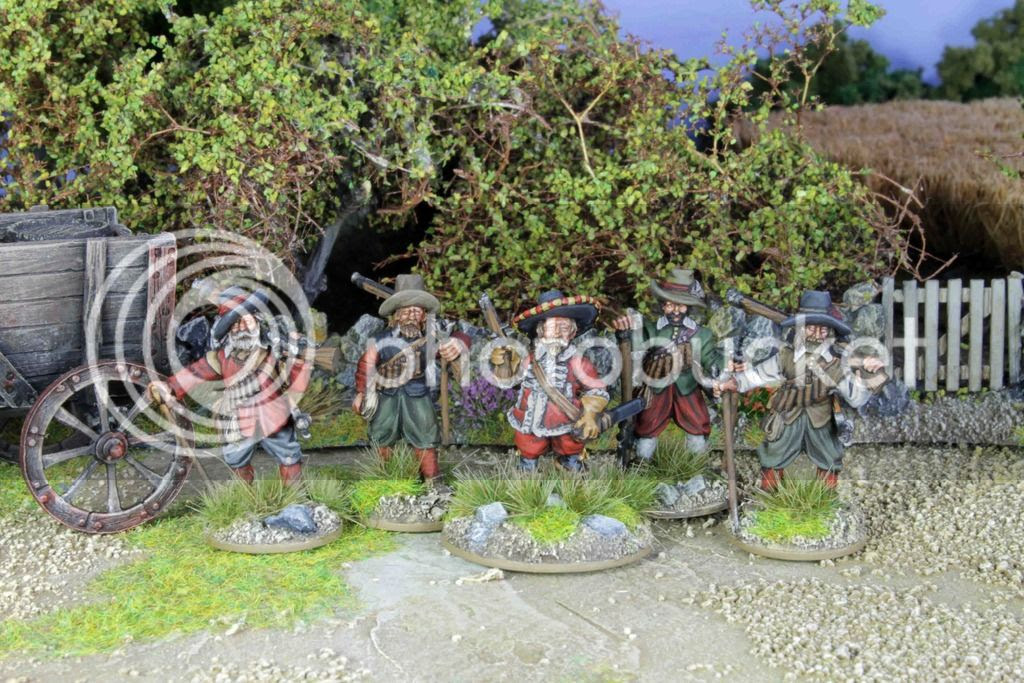 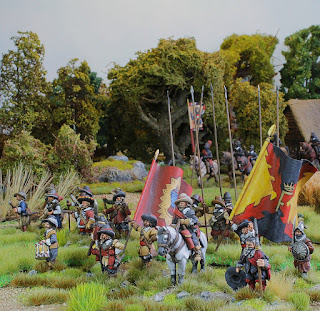 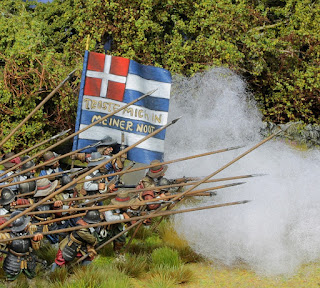 ...because I am on my way to conquer the
Mountains of Lead !

My fellow Bloggers of Conquering the Lead Mountain and The Doc´s Diary and I decided to put our efforts together in the never ending struggle to explore the tops as well as the deep and hidden valleys of the Lead Mountains.
To all of you who followed my Diary and supported my hobby enthusiasm: Thanks a lot! Please follow me to the Mountains of Lead, I think you will not be dissapointed!

It´s been a while, but I of course I´ve painted more 40mm French. First the magnificent Perry Cannon, Resin miniatures and absolutly fantastic to paint, but a bit fiddly to assemble. It´s finished, sorry for the crappy pics. The gun will be the objective in our TACTICA participation game. 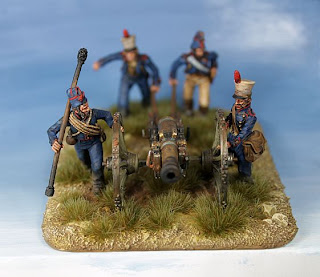 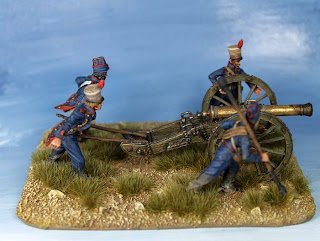 A Sappeur to guard the cannon. He will get a melee bonus, cause he´s tall and strong and has this nasty huge axe. My favourite miniature of the range so far. 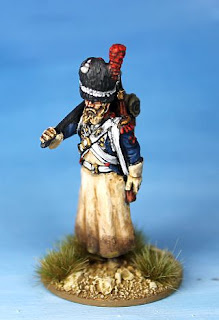 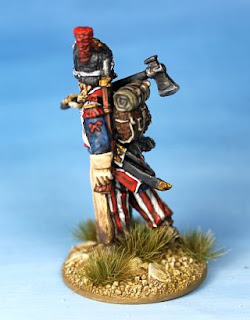 I hope all of you had a nice party yesterday and a good start into 2013. Again Christopher inspiered me to write this post.
The review of my plans for 2012 is quickly done. The only project I´ve finished was the Trojan Project with Tilman, which I really enjoyed. But I didn´t paint any Future Wars or Fantasy stuff as I planned one year ago. Instead I did some various miniatures for the Lead Painters League, but I didn´t perform well.
BUT then I was hit by the Musketeer Miniatures gorgeous Germans, and started painting Germans for the Migration period. I painted a lot of them, a 4 pt. SAGA army and almost a Dux Britanniarum Starter force, plus some terrain. I really stayed focused (OK but bought a lot of other stuff for my Lead Mountain) on this, to my own suprise. Plus the 40mm Perry stuff I frequently painted.

Hell yeah!
40mm Nappies: I will finish my french and spanish guerilla , the deadline is end of February. I really enjoy painting this scale at the momment, and would like to paint up some 8 or so British Light Infantry And/or 95th Rifles as opponents for the french. But it´s possible that I get tired when the TACTICA is over.

Incursio Barbarica:On Top of the list. Paint the remaining Germans and a Late Roman force, really lookig forward to this! Plus a gaming matt and more scenery, more civilians. Play Dux Brit. with Tilman then.

That´s what I will do for sure.

Other ideas (at the momment):
Russo-Japanese War with Tsuba´s excellent miniatures.
Something in 15mm with Tilman, most possibly FoW.
40k Eldar (no GW bashing please ;-) )

Let´s see how long this ideas will last... 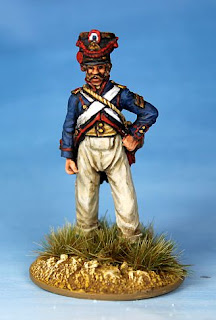 TACTICA gets closer so I painted only 40mm stuff over X-Mas.  I will run a participation game (I already told you didn´t I?) with my mate Björn, and there are 11 Minis left on my Workbench, and two month to go. But I´ve always performed well under pressure so I don´t worry. First a french Arti NCO, one of the latest addition for Perry-Miniatures Peninsular range, made of finecast (has to be finecast cause the prize rose from 3,50 to 4,50 GBP). But it´s a damn fine sculpt. He commands the 4 man crew of the gun you see below, I will mount them on a large multibase with the gun. The cannon will be our objective in the game. 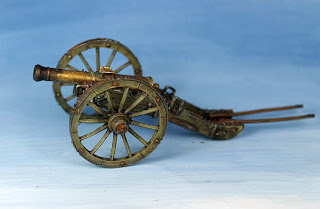 And another guerrillero, a conversion of a french Voltigeur this time because the Perrys only have 3 different ones in their range. 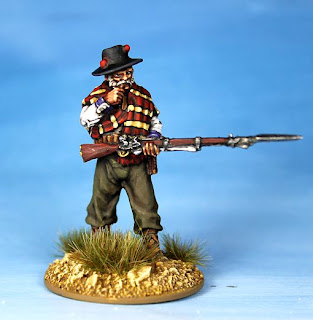 Last but not least a quick shot of the NCO (can anyone please explain to me in which way a Non-Commissioned-Officer differs from an Officer?) with a House I built 4 years ago for my 28mm SCW collection. Suits well I think. 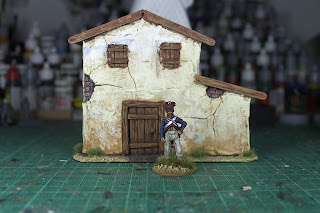 I wish all of you a nice party tonight, "Guten Rutsch", and a happy new year.
Jan
Posted by Lt.Hazel at 16:00 6 comments: