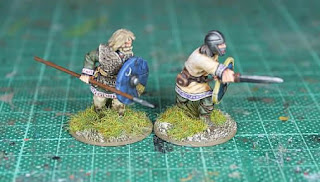 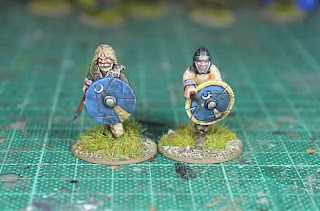 OK the first 8-man-unit takes shape..only one lightly armed warrior missing.
Zotto and Faroald, Shield designs are from my blue period.
Posted by Lt.Hazel at 15:42 3 comments: 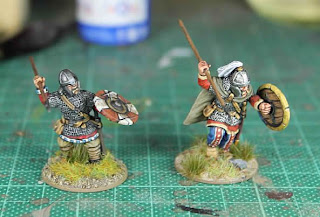 The big guys, Dederic and Guthbert. For the  start I´ll use the SAGA rules. For a 4 point Warband that´s a Warlord (of course), 4 Commitati, 2 x 8 Warriors and 8 archers. Guthbert on the right is an old paint-up, but I gave him a new Base and varnished him.
Posted by Lt.Hazel at 18:54 2 comments:


Another day, another pic... 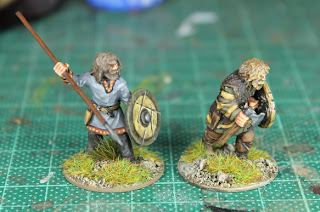 Aerthul and Beorga. I really like the germanic fashion, stripes everywhere! Beorga on the left has a little matt-varnish accident on his head, but I already solved it with Devla Mud. I found an interesting pic of wool dyed with genuine ancient recipes: 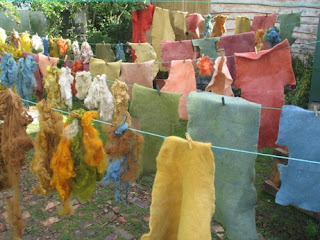 OK with over 100 followers (HOOOOORRAAAAYYYY) it´s time to start a serious project!

As I´m getting older and wiser and I realized that I´m not the painting-large-armies-type of wargamer. So I´ll concentrate on skirmish projects with a more heroic, story telling approach.


I always loved the Late Roman/ Early Byzantine period, seeing the decline of Western Rome´s power and the raise of the German tribes, they of course only fleeing from the Huns pressing in from the east. So here are some great opportunities to build some small german or hun raiding partys and roman patrols to stop them looting.
My german tribe of choice are Saxons. I live in a city near the Teutoburg Forrest, an area where, in ancient times, the Cherusci slaughtered Varus´ legions, and the Cherusci later became Saxons when the allied with other tribes. So here the first ones, Witold and his younger brother Erkmar. 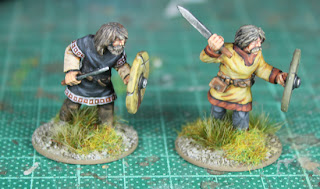 Both are from Musketeer Miniatures Gothic/German Tribes range. The fellas at Gripping Beast (they owe MM now) were so kind to make a deal for me including all 18 different warriors on foot they offer, so no doubles in my warband. I armed both with a Sax, a long knife most of the part-time warriors used - swords where a bit pricey, and they have to kill some Romans first to get better weapons and some armour.
More to follow soon...
Posted by Lt.Hazel at 13:20 3 comments: 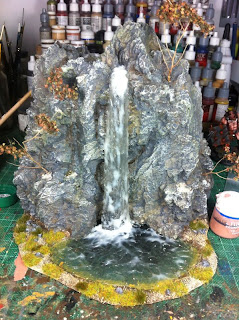 Wow, 100 posts. I´m quite busy actually, painted a lot for the LPL. And I bought this Faller Waterfall, added a base and some watereffects. I think it turned out very well. ﻿ 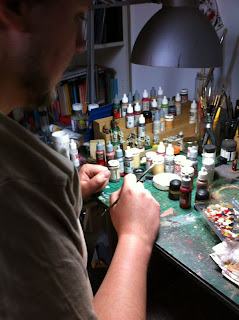 And last weekend Tilman from Conquering the Lead Mountain was here, and did very well as my personal painting slave...he did this gorgeous Dark Age miniatures for me. Look at the freehand shield design! He´s guilty for my newly awakened Dark Age Germans fever, primed and based 20 or so right after he left. And ordered some Musketeer Late Romans, because they´ll need some opponents.
So more to come the next weeks. 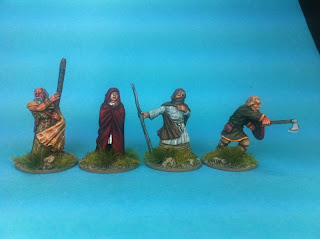 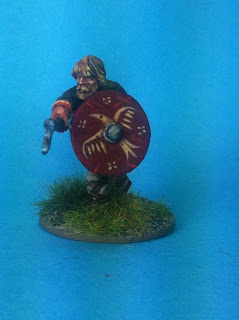