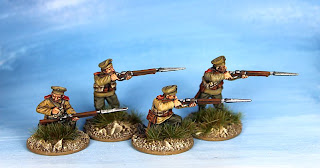 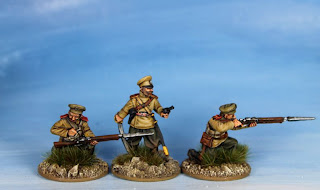 Hi all!
After painting so much armour and colourfull clothing and shields my eyes needed a break. After Björn wrote some Russo-Japanese-War army lists for Triumph&Tragedy I decided to paint some khaki wearing Russians. For a link to the army list pdf have a look at the Tsuba Miniatures site. There you can buy this fantastic miniatures sculpted by Paul Hicks, the Russians also can be used to represent the "colourfull" regiments of the South Russian Army during the Russian Civil War.
I experimented a bit with different khakis and washes on the shirts of the Russians. Their official summer dress where white shirts and white cloth cover for their heads. But they soon realised that the Japanese where good shooters and order was given to dye the white cloth or stop washing them. The dying was done by local chinese labourers and the result where a wide variety of khaki shades.
Enough said, I´m happy with how they turned out,
Cheers
Jan
Posted by Lt.Hazel at 14:00 14 comments: