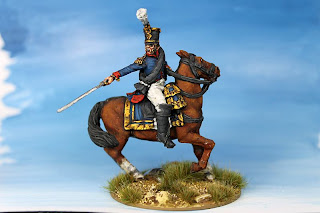 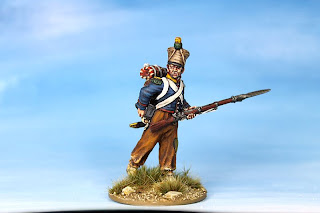 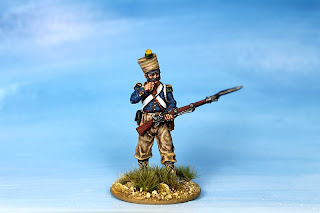 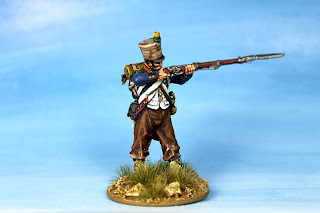 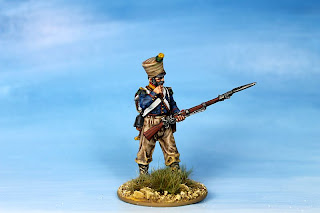 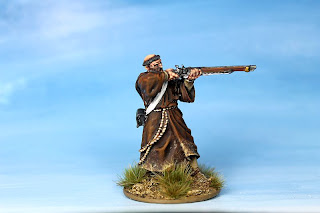 Some older stuff that some might have seen in the last LPL. The Colonel and some Voltigeurs. The monk was the first 40mm fig I ever painted.
Posted by Lt.Hazel at 18:01 7 comments:

40mm for a change


After painting so much Germans, what I really enjoyed, it´s time for a change. As promised I painted up some 40mm Perry Peninsular stuff. A Lippe-Detmold Officer checking his watch and a guerillero. They will appear on the TACTICA in 2013 where I will run a participation game with my mate Björn, the author of my favourite ruleset "Triumph &Tragedy". That´s really cool because back in 2009 I ran my first game at TACTICA with him, SCW using his own rules. There are some more Frenchies and Guerrilleros to paint, so stay tuned. 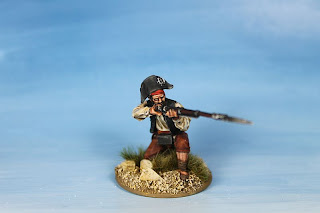 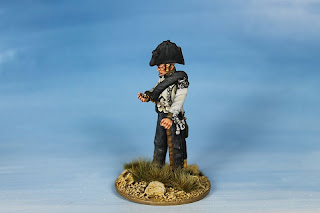 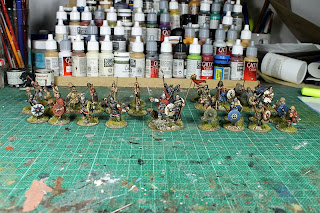 I finally made it! The last 6 levies are done. I mixed 4 slingers in my ranged combat unit, because bows and slings have equal range. I´m a bit proud that I finished my warband in two month, that´s 33 miniatures - in full colour! Ok, some were painted earlier but the vast majority of miniatures got their paint on the last two month. All human minis are Musketeer, mostly Goths with some Saxons and Late Romans mixed in. One WestWind Arthurian head was used and a Warlord Games Dog.
I´ll use the Viking list for them, I think the aggressivnes fits very well for my Saxons. Haethelmar is accompanied by his 4 Bucellari (Point 1), two units of 8 warriors each (Point 2 and 3) and 12 levy with bows and slings (Point 4). We´ll see how they will prove themselves on the field of glory.
I ordered Dux Britaniarum and I´m very excited how they´ll turn out. I will paint up some more Warriors and some big men for DB later.
Now it´s enough Germans for the momment I think, on to my 40mm Nappies and some Russo-Japanese War minis. 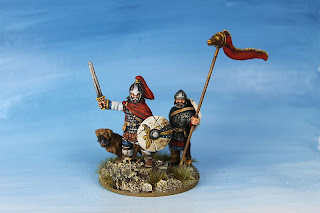 My parents took my camera with them on a trip to Finnland, but I have not been lazy. Now that the cam is back first pic of what I´ve done:
I finished my command-stand. After playing SAGA for the first time 2 weeks ago I had to finish this first, cause the Leader is very important in the game and needs to be properly represented on the table top.
I introduce to you: Haethelmar, a Saxon Warlord born in the shade of the Teutoburg forrest. Accompanied by his two most reliable followers: Allrich, the Draco bearer and his Dog Vroth. 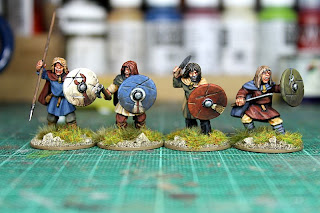 I bought some minis from Musketeer´s Early Saxons range and equipped them with large shields to get more diversity in my posse, these are Geoguth or Young Warriors with cloaks. The Saxons have been sculpted earlier then the Goths, and as a result their hands are sculpted open and the weapons aren´t that strongly fixed to the models. The Sax from the one with the red shield felt from his hand twice! After painting  >:( Anyway, they are great sculpts. Again I painted their clothings simply due to their lower social status.
You see Aethel, Gunthigis, Ervig and Urte.
Posted by Lt.Hazel at 22:05 7 comments: 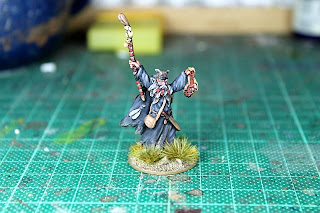 Quik update. I´ve been quite productive this Weekend, I painted 5 Models and my Warband approaches it´s completion. I´ll take more pics tomorrow.
Meinrad, my pagan priest. I really like this miniature.